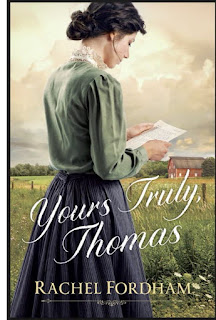 I recently had the pleasure of reading this lovely historical romance novel. Inspired on a post office tour, author Rachel Fordham was intrigued by the dead letter office, which is where mail went that couldn't be deciphered. Clerks in the dead letter office would open the letters and search for clues as to where they should go. If sufficient clues were found, the letters could be forwarded along. If not, they were tossed out. Since these days, it is a federal offense to read someone else's mail, even if you do work at the post office, this process was fascinating to me as well! It was through the intrigue of the dead letter office that the idea for "Yours Truly, Thomas" was born. In this novel, Penny, who has a deep affection for written correspondence, works in the dead letter office in Washington DC. One day, a letter comes across her desk from a man named Thomas to a woman named Clara, and Penny's heart aches for the tender emotion he expresses. She longs to see Thomas and Clara have a happy ending and goes above and beyond to try to see that through. Meanwhile, Thomas is running from his past and ends up in Azure Springs, Iowa. Fans of Ms. Fordham will recognize that as the city where her debut novel takes place. Though both novels are stand-alone, we see a few recurring characters and I was ever so glad to see them again! 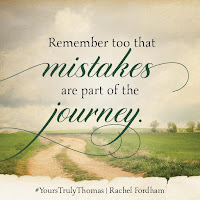 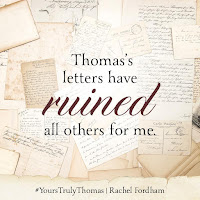 Being a part of the book's launch team, I was afforded a fun look at some trivia from the writing of the book. Here are some fun facts that the author shared with us:

The prologue was written during editing. My editor suggested I play around with an opening that would give us a glimpse of her past or his and I decided to go with hers. i had my reasons for not wanting to show his.

The last chapter was originally all a letter to Dinah. In editing they suggested I write it in real time and we see which we like better.

In my very first draft penny’s mom was the nicest woman alive and she passed away and that’s what initiates Penny’s quest. Everyone felt it was too tragic an opening (I must say it was a string death scene) so I needed another reason for her to leave.

There was no dog in the first draft. She came later and was named Lulu after a cat we have. But it was changed to honey later. I’ve never owned a dog so I was nervous writing one but ended up enjoying having her around.

The time before penny leaves DC was originally about 25 pages longer. But everyone wanted them meeting sooner.

The pie scene originally had Thomas taking bites out of each pie and my editor said all she could think about was the germs so I changed it but in my head he still does that!

Penny’s last name is Ercanbeck which is a modge podge name made from an old family name and my maiden name squashed together.

I took my oldest two boys to DC and we spent a lot of time at the Postal Museum. It’s amazing the time and energy that was put into returning letters that were lost in the mail. Some favorite pieces of trivia learned from research were that more women than men worked at the dead letter office at the time and the envelopes they saved because they were proud they were able to do the “detective work” to return them.

The quote I chose to include at the beginning that I believe captures the “message” of the book is, “God whispers to us in our pleasures, speaks in our conscience, but shouts in our pains: it is His megaphone to rouse a deaf world.” by C.S. Lewis. I took a course on Lewis in college and have loved the ways he describes things ever since. 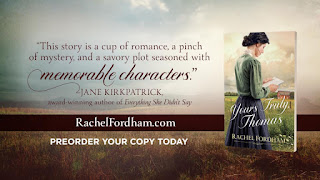 Yours Truly, Thomas releases on July 2, 2019. For more information, check out the following links:
Rachel Fordham's website: https://rachelfordham.com/
My full review of Yours Truly, Thomas:  https://www.goodreads.com/review/show/2544287746

Popular posts from this blog 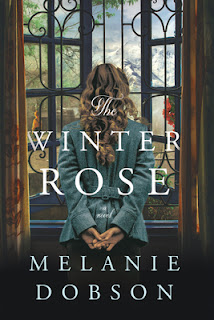 One of my favorite dual timeline/WWII authors is Melanie Dobson. She writes such beautiful story-lines and this one was no different. This may actually be my favorite of hers. It definitely ranks in the top 3 favorites for this year. This book follows Grace Tonquin in the historical timeline, who is an American Quaker, working in France to save Jewish children from the Nazi regime. In the modern day timeline, we follow Addie Hoult, who is searching for the Tonquin family to save her friend Charlie. Both women's story-lines are heart-rending, but filled with hope. The message of the gospel shines brightly in this novel and the characters are easy to love. The story had me turning pages readily to see what would happen next. This is one to definitely add to your list of books to read! Here's the back cover blurb: In this gripping split-time novel, Grace Tonquin is an American Quaker woman who works tirelessly in Vichy France to rescue Jewish children from the Nazis. After crossi
Read more

Book Recommendation - Between the Wild Branches 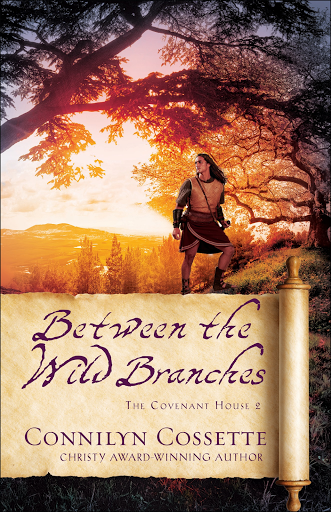 Connilyn Cossette is one of my top Biblical fiction go-to authors. This book is just another example of "why". This book is the 2nd in The Covenant House series, but can be read as a stand-alone (though I would recommend reading in order if you're going to read both of them). This book, while not focused on actual events of the Bible (those happened in the last story) includes some of the background and historical and cultural context of the time of Samuel. References to Samson's destruction of the Philistine arena are also included in this story. This story is very redemptive in nature and in addition to strong character development, includes several plot-lines that keep you turning pages. This is one I'd strongly recommend! In addition, if you pre-order, you can get 8 bonus chapters that fit in with this story, but technically take place during the previous book, To Dwell Among Cedars. These bonus chapters should not be read without having read the first book
Read more 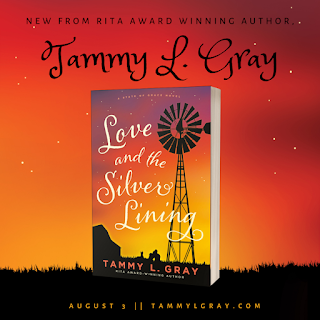 Tammy L. Gray is a contemporary romance author, well known for her raw emotions and the very real struggles that she includes in her story-lines. This most recent read is about Darcy Malone, whose world comes crashing down when all of her well-laid plans come unraveling at her feet. Without a job, a place to live or even a family that she can count on, she has hit rock bottom. I really enjoyed Darcy's story and how she worked through her struggles to discover who she was, once again. I also loved that dogs played a part in that. Here's a little bit about the book: THIS DISASTER MAY BE JUST WHAT SHE NEEDED Darcy Malone's dreams of mission work are dashed on the eve of fulfilling them: The Guatemalan school she was going to teach at has closed, and she's already quit her job and given up her apartment. Stuck in her worst-case scenario, Darcy accepts an unexpected offer to move in with Bryson Katsaros's little sister, despite the years of distrust between her and Brys
Read more